” A Portrait of Love, Grief, and Injustice”

“As this grisly decade has revealed, there is no shortage of dead black men whose shooting deaths go unresolved in this country, and no shortage of black families for whom justice remains elusive.”

“These people weren’t wealthy, but their wealth was that they were white.”

Yance Ford’s feature, Strong Island, is an investigatory true crime documentary about the 1992 murder of Ford’s older brother William and the failure of the criminal justice system to bring the white killer to trial. It’s also a memoir about family, and a tale about the intersections of individual aspirations with the crippling realities brought about by de facto segregation, the historically-based entrenched presumption of Black criminality and guilt, and the vague yet pervasive white fear that creates the conditions for justifiable homicide.

When Strong Island was nominated for an Academy Award for Best Documentary Feature, it became the first film by an openly trans director to be nominated for an Oscar. This milestone has tended to overshadow the achievements of the film itself, but it has also given a wider platform for the film. Ford himself is a prominent figure in the film, as investigator as well as subject, and he has used his Oscar nomination platform to call attention to the fact of disproportionate violence against trans people of color—not a direct concern of the film, but insofar as the gross injustice of the devaluing of Black lives is central to Strong Island, Ford’s use of the film and its narrative share the same investments. Strong Island is a nickname for Long Island, where Yance Ford’s parents raise their three children and where William is killed. But it applies to the family as well, not only its strength but also its isolation. As much as the film is about William’s murder and its effect on the family, it is about what it means to have siblings, to have unconditional support and love, and to have that love wrenched away inexplicably. Through interviews and family ephemera, Ford unflinchingly traces the moment-to-moment experience of losing a family member to murder, and the unrelenting process of grief that arises and endures. As Ford himself says in the film, the murder is the beginning.

Yet this family memoir is meant to speak more broadly to the disregard for Black life found in all corners of American civic life—from the hospital that fatally neglects Yance’s grandfather’s asthma to the grand jury that refuses to grant William’s mother the basic courtesy of attention. Like many Black men before and since, the victim is treated as the aggressor and subject of official investigation, and not the white murderer.

That Black murder victims are treated as culpable in their own murders is a perversity that has been increasingly called out in the last few years by Black Lives Matter activists and others. What Yance Ford does in Strong Island is to painstakingly trace the precise moments that comprise the functionings of this systemically ingrained presumption—and its consequences for individual lives. That William Ford dies is a family tragedy. That his murderer isn’t even brought to trial is a national disgrace. Strong Island is the rational and methodical public shaming of a society that protects white fear over Black lives. When in a tightly framed direct address Yance Ford asks the viewer, “Whose fear is reasonable?,” he points to the complicity of the media and its viewers in generating and sustaining the kind of fear that allowed William’s murder to go unanswered.

Ford responds to this situation with an insistence on individualization. The pleasure in Strong Island—which is important to point out amidst the vulgar absurdity and despair of William’s killing—is the film’s depiction of the Ford family. The heart of the film is William’s mother, Barbara, who is perhaps the ultimate victim of the injustices that accumulate across the story, but also the most prescient and eloquent interpreter of the events relayed in the film. It is the film’s greatest achievement that Yance Ford recorded his mother’s memories and her astute analysis of the broader conditions that led to William’s killing and its judicial aftermath. The film succeeds most when it is able to keep these two levels, the specificity of the familial and the generality of the civic institutions, in play with each other. In this work, and in marshaling the evidence of the crime, Ford creates a counternarrative to the official story that enabled William’s killer to avoid standing trial, a counternarrative that reaches upwards to address the systematic racism of the social order that allows this to happen. Three things endure from the film, however—the persistent inequality before the law faced by people of color in the United States, and the power of love… and grief.

“In the weather of the wake, one cannot trust, support, or condone the state’s application of something they call justice, but one can only hold one’s breath for so long.”

– Christina Sharpe,
In the Wake: On Blackness and Being

Yance Ford’s Strong Island is a quiet film, one marked by a camera that barely moves. Out of this stillness, one also senses an untetheredness. As viewers, our eyes are free to travel around the frame. The frame contains, yet the static camera and extended shot durations allow ample time for us to wander – though still constrained by the frame. Strong Island feels intentionally claustrophobic; its atmosphere makes it hard to breathe. Despite all this, perhaps this state of being, untetheredness within the confines of the frame, might suggest a possibility for Black liberation.

Christina Sharpe ponders the metaphor of the wake to understand the afterlife of slavery in her recent In the Wake: On Blackness and Being. Using dictionary definitions as a starting point to expand her theorization, Sharpe understands “the wake” as the aftermath of trans-Atlantic slavery where Africans were transported to the Americas in ships, the power of sitting in community in grieving rituals for the dead, as well as the state of wakefulness as “consciousness…of the unfinished project of emancipation” (5). Accordingly, she describes wake work as a way of insisting on Black life in a world where Black death is omnipresent (17). In this way, Yance Ford does wake work in Strong Island.

Ford is markedly rigorous in his shot selection, including the way each shot is framed. I find myself particularly drawn to the sequences in which snapshots from Ford’s family archives predominate. I want to examine two sequences in the film: one comes early in the film, and the other is the final sequence. In both sequences, Ford’s hands manipulate the photographs, which shifts the framing of the subjects. As he inserts his present self into the past of the snapshots – caressing them, placing them and removing them with care – his hands become embodied frames, re/centering the photographs, re/adjusting our sense of the images.

In the first sequence, Ford unfurls a stack of photos onto the white background. We hear the first instance of Ray Charles’s “Let the Good Times Roll.” This song plays exuberantly on the soundtrack, and as the film speeds up, Ford arranges, then rearranges, the pile of photos. Through the accelerated visual track, we get quick glimpses of the family in happier times and smiles abound. As Charles sings on the soundtrack, it seems like the good times are rolling indeed.

The photos harken back to another time, and they offer another space in the film. In entering into the film, we go through a door of no return. There is no coming back from the trauma – William’s murder – yet, these photos offer a digression from the unfolding of the story. These snapshots offer some time to reflect, to let go of our breath.

In the final sequence, Ford places a photo of the three siblings, as young children, looking sharp in their Sunday best, in the center of the frame. His fingers are visible for a few instants, and then they move out from the bottom of the frame. The photo sits, in the middle of the screen, with a virtually silent soundtrack. Some seconds later, there is a quick cut to an extreme close-up of Ford, in profile. After making a quick adjustment to his glasses, he places his hand against his forehead while studying the out-of-focus photo in the background. Another quick cut, back to the photo of the three siblings, a little left of center, a static shot once more. This time, barely a few seconds pass before Ford’s fingers appear again at the bottom of the frame. They make contact with the photo and drag it out of the frame. The three siblings disappear and there is another jump cut to black. A couple more beats of silence before a horn section brassily interrupts the silence, reintroducing Ray Charles’s celebratory exhortation: “Hey everybody/Let’s have some fun/You only live but once/And when you’re dead you’re done/So let the good times roll/I said let the good times roll. and the saxes come in, sultrily swinging, I don’t care if you’re young or old/You oughta get together and let the good times roll.” 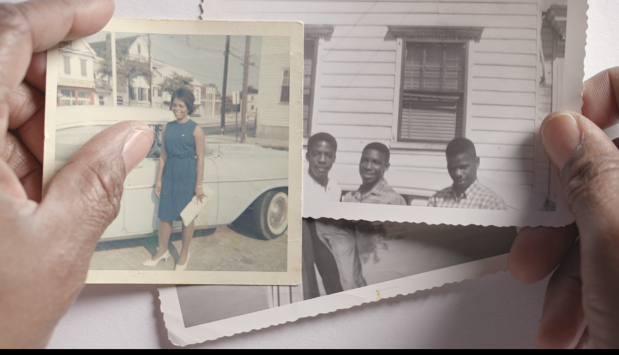 What if these embodied re/framings are openings? Moments of liberation? What if the photos are a doorway into an idyllic past? In their ghostliness could they be evidence that counters the weight of Black death in the wake, in the climate of racial violence? Perhaps we might understand these sequences as opportunities to breathe?

Returning to the earlier sequence, the joyous exuberance comes to an abrupt end with a shot of a single photograph of Ford’s mother, father, and two children. The music stops, and Ford’s voice returns to the soundtrack; there is a delay before he appears onscreen, once again, in a close up against a black background. He recounts a lesson that his mother instilled in all three siblings: “No matter what…our principal job in life was to love each other.” While Strong Island recounts a saga of racial violence, antiblack violence that persists across generations, it is also a gift of love.

By the film’s end, we understand that justice has not been served. Contrary to what Ford’s mother asserts three times at the beginning of the film, that we just need to “wait till we get to court,” we eventually understand how futile this expectation really is. Death is omnipresent: the grandfather who dies in the hospital of institutional neglect; the father who is debilitated by the death of his son, and eventually has a stroke that disables him; the son whose murder never goes to trial. In the afterlife of slavery, as “Black peoples in the wake with no state or nation to protect us,” Strong Island does wake work. Yance Ford does wake work in his film. In its investigation of William’s murder, Strong Island is anchored in and by Black death, though at the same time it offers glimpses of vibrant Black being, “attest[ing] to the modalities of Black life lived in, as, under, and despite Black death” (20). Let’s breathe.

One thought on “April: Strong Island”